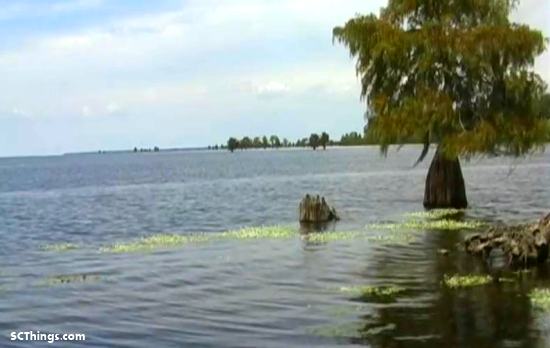 Lake Marion was started in the early 1940s by the Santee Cooper Project. It takes up nearly 110,000 acres of land in five SC counties: Berkeley, Calhoun, Clarendon, Orangeburg, and Sumter. It hosts Santee State Park, which can be found just outside of Santee near I-26 and I-95.


The lake is named for the Revolutionary War hero General Francis Marion. Lake Marion is most famous for it’s populations of landlocked striped bass.

During the Great Depression, South Carolina began a controversial project. With the use of federal funds, 40 miles of dams and dikes were constructed to flood 160,000 acres from the historic, moss-hung low country of Charleston, all the way inland to Columbia, to create Santee Cooper, Lake Moultrie and Lake Marion. The reason for the project was to create hydroelectric power for the surrounding rural areas. However, when the locks of the dams were closed, the striped bass – an anadromous fish (one that leaves the sea for freshwater rivers during spawning season) – was trapped and unable to return to the ocean. After several years, fishermen and biologists realized that the fish were not just surviving, but also reproducing, thereby sustaining a landlocked population.