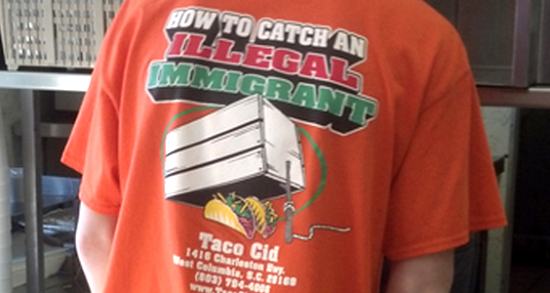 The Taco Sid T-shirts depict two tacos underneath a box held up with a stick like an animal trap. The restaurant owner says the shirts are meant to be comical and draw attention to illegal immigration. Some critics say they’re just racist.


A West Columbia Mexican restaurant is defending itself against accusations of racism for selling a t-shirt that describes “how to catch an illegal immigrant” using two tacos and a trap.

Restaurant Taco Cid, in West Columbia, says the shirts are “comical” and a reasonable political statement about immigration policy in the United States.

Some Minority rights groups have slammed the message as insensitive and as a ploy to drum up business.

“This is simply a failing business trolling for attention… We would recommend people not patronize this place. Sure, because of this insult but really due to the fact that a restaurant this clueless about the Latino community can’t possibly make a decent taco.”